I’d like to take a deep dive into ground venison.  It is the basis of over half the preparations in my kitchen.  The real workhorse or backbone if I may use a cliche of wild game cooking.  The thing that substitutes wild game into most “normal” recipes.

But it seems that it doesn’t get much respect. And that’s too bad since it’s like the gateway drug to using more wild game in the kitchen.  It’s also the preferred method to introduce (sneak in?) deer for non game eaters. Where I come from it has a bad reputation for deer burgers.  But I’d like to dispel some of these myths and shine some light on my methods for making quality grind.

Seems like most people in the “modern” era of wild game cookery are trimming the hell out of venison for grinding.  Mainly because the “fat is bad”. Like to the point where it is a major time commitment to get every last speck of fat off.  I’m here to provide an alternative by sharing my experiences over the last few deer.

Last year I tried a new butchery technique I like to call the whitetail rib roll.  It can be used on any species of deer really. You can read about it HERE, but the basis is that you keep the flank, rib meat, and neck connected in one large slab of side meat by filleting the rib bones from their meat.  I love venison ribs, and it is sheer and utter wanton waste, not to mention seriously lazy to discard them. You can read about my method to make good deer ribs in the near future. Both Steven Rinella and Hank Shaw have good deer rib methods.  Mine is based off of theirs.  It will work with any specie of wild game ribs.

As summer let out I was out of grind and kept eyeing three rib rolls from last year.  I had plenty of hog fat from the hog I raised last year and decided I was going to make some serious grind out of it.  But, I wasn’t going to trim anything from the rib roll as an experiment. 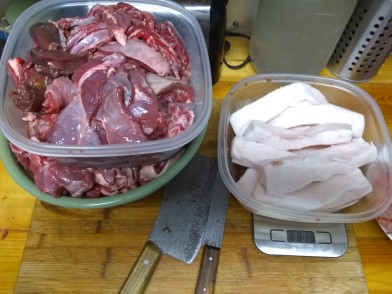 I proceeded to cut the rib roll into strips, only taking 5 minutes to trim any pure fat globs from the outside.  All connective tissue and fat between meat layers stayed. I cut 20% by weight hog fat into the grind. And I proceeded to stuff it all through my wife’s Kitchenaid stand mixer with grinder attachment.

It didn’t like it, I could tell.  And neither did she.  But it did it and I was left with some beautiful grind with plenty of fat, which is rare for wild game.  I used it a few times and can attest that there was no complaints from anyone about the sticky, tallow-y, waxy deer fat.  No off flavors, and a good mouth feel. 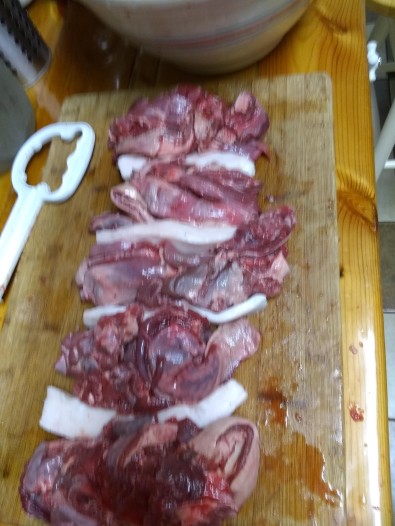 So, here is my theory; and this applies to the process for venison ribs too.  The physical white fat on deer is only a carrier for the tallow. Once you cook the fat, and have a way for the tallow to separate from the fat what is left is not waxy.  By slow cooking venison ribs and then putting them on the grill for the fat to drip off, it works. For the grind, I think the tallow some how binds with the pork fat and when you spoon off the fat from the grind it just seems to work.

I think the fat, both deer, and hog gives the grind a better mouth feel.  It definitely helps it bind better too. Thus making better meatballs and burgers. And maybe the best benefit, no time consuming trimming.  Everything goes in the grinder. Stop wasting those ribs, flanks, and necks. 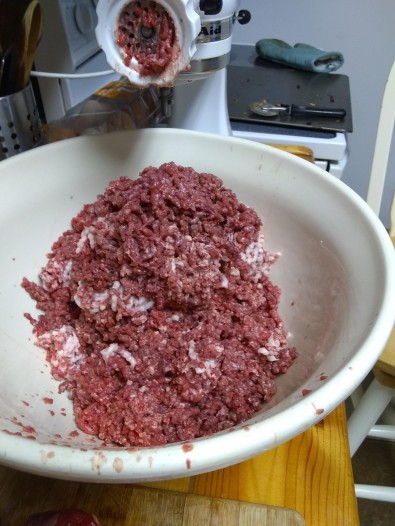 Worthy of mention is that when I sealed packs of 1lb 3oz of this grind, we kept noticing not quite the same amount of cooked grind meat.  We noticed that our left overs were on the small side.  So, the yield is slightly lower because of the connective tissue and fat. I then tried 2lbs and it was too much for trying to replicate a normal pound of grind.  So, these last packs, I made 1lb 8oz and that seems to have done the trick.

Ideally I would like to add maybe 25% shoulder meat to this grind. Top or bottom round, or bottom sirloin would be good choices to include to make quality grind as well.  But only if you need grind, or want only the highest quality.  It would balance the ratio of meat to connective tissue better.  There is a lot of fascia in the side slab of meat.

As for where to get other cuts to grind, shanks can be ground, but might be better for braising.  Shoulders make nice grind. But, are sure good for stews and curries too. I wouldn’t waste hind quarter cuts for grind unless you were out and needed it bad.  Hind quarter cuts work better for roasts and jerky. By using this system I can hit 50% yield from my dressed deer. 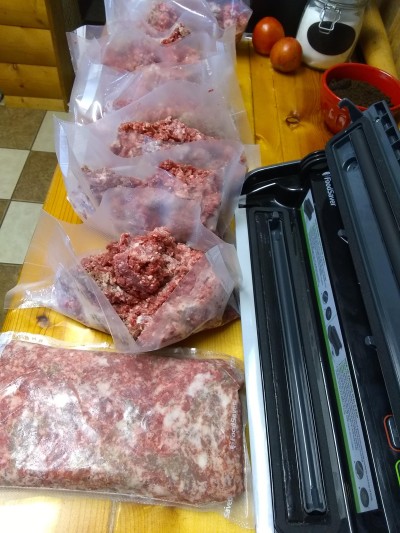 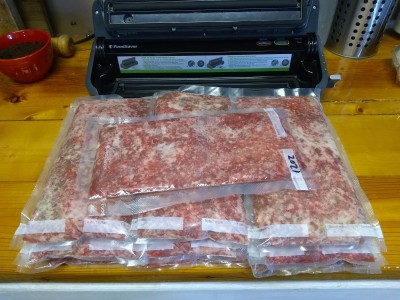 Avid outdoorsman living in the Virginia tidewater. View all posts by brackishwaterculture